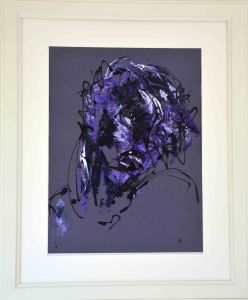 This is one of two pieces which were included in Nocturnes, a group art show which I curated here in Freeport.  Nocturnes opening was last night and generated a lot of interest. I am preparing a full case study of the experience, which will be published here in due course.

The piece is titled Self Portrait in REM and is executed in acrylic on paper. My amateurish photograph doesn’t do it full justice, but you can get the idea.

While most of us see dreams when sleeping, I have visions from my disturbed nights when I am awake. This image must have been one of them.  It came about spontaneously, in the midst of other things. The idea for Nocturnes was already brewing in my mind so it must have had something to do with it.

Rapid eye movement also alludes to the rapid movement of the hand while creating this entirely gestural piece. Gestural painting is possible only when one is deep ‘in the zone’ – a state of mind  as far from awareness as only sleep could be.  Maybe for this reason, even in retrospective, it is impossible for me to differentiate between intention and accident in the content and form of this piece, including its title.

5 thoughts on “Self Portrait in REM”